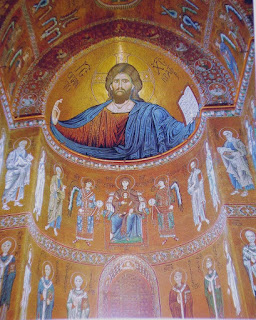 These are mosaics from the Cathedral of the Nativity of the Most Holy Mother of God in Monreale, a suburb of Palermo in Sicily. It was begun in the reign of King Guillaume II the Good, and was built between 1174 and 1267. It contains some of the finest extant New Roman mosaics.

New Roman, of course, is the correct usage for what is mislabelled “Byzantine” in Catholic and Catholic-influenced sources. Why did this distortion arise in the West? No doubt, it was to mask the continuity between the Classical Roman state and the Christian Empire of New Rome. If we refuse to use this Western artifice, we see the obvious links between Old and New Rome, and between New Rome and Moscow. The doctrine of the “Third Rome” not only becomes understandable, it becomes imperative and necessary.

“Old Rome fell to the axes of the barbarians. New Rome fell to the infidel Turk. Moscow is the Third Rome, and a fourth there never shall be”. This becomes clear only when we discard the construct known as “Byzantine”. We Russians bow to New Rome, and acknowledge our debt to her. In doing so, we also bow to Classical Rome, the mother of New Rome. Thusly, Classical Rome was the mother of Christian New Rome. Christian New Rome was the mother of Christian Moscow. We, the heirs of Christian Moscow, have the fullness of apostolicity through our direct connection with New Rome, which gives us an ultimate connection with Orthodox Old Rome, which leads to the final connection with Jerusalem and the Upper Room.

Therefore, as these mosaics illustrate, a connection with New Rome obviates any necessary submission to the Pope of Rome and Patriarch of the West. That is to say, His Holiness Aleksei and His Holiness Benedict are absolute equals. When the Catholics understand this, there can be talk of union. That, I must say, is far down the road. The best that can be done is good neighbourly relations and cooperation in works of good will. I fear that the Pope of Rome shall never give up his pretensions to universal jurisdiction and infallibility. Until he does so, the most that can exist between Catholic and Orthodox is friendship and fellowship in good deeds. That, however, is no small thing, and must be pursued. At the same time, the opium dreams of ecumaniacs must be opposed, for that shall only lead to disillusion and disappointment. Let us grasp for what is feasible. It is the only sane course.

The Creation of the Cosmos

The Creation of the Birds and Fishes

The Creation of Adam

The Creation of Eve

The Meeting of Adam and Eve

The Fall of Mankind

Adam and Eve are Expelled from the Garden

The Temptation of Christ

Christ Heals the Man with a Paralysed Hand